Why are there no fountains in Dublin City?

No, really. Why are there no fountains in Dublin city?

The very few I know of are trapped on inaccessible traffic islands, locked away in parks after dark or enclosed behind security fences in exclusive developments.

Is Dublin unique among cities in that is not suited to fountains? I doubt it. 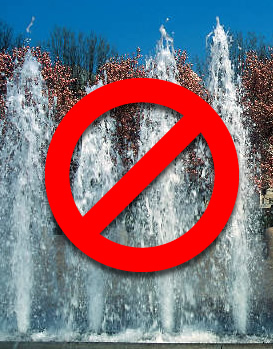 (Sure the Floozie in the Jacuzzi was a bit of a disaster, but that was due to poor choice of location and inappropriate design.)

Rather, I think it is just an example of our city's paucity of vision (and perhaps paucity of means) - a paucity that is reflected not just in our 'fountain-deficit' but in a generally dull and uninspired urban experience.

Dublin is essentially a Georgian/Victorian town dominated by brick, wrought iron work, rust-coloured granite and grey limestone. This is accented by intrusions of imported white-limestone and marble.

A unity of style could readily be fashioned from these elements and used as a basis for civic development; whether in street planning, street furniture, signage, etc.

Aesthetic unity of this type can be seen in cities to which Irish people flock for weekends-away. Edinburgh, for example, employs extensive use of its dark stone in street features and Bath insists on local honey-coloured limestone in all building work.

As a European capital, Dublin could be expected to have such a vision - but it does not.

The varied design of street furniture such as public benches, paving, street signs, bollards, bins and street lamps, suggests that each renewal project is planned by a separate committee with no guidance and no templates to work from.

Dublin looks as if WOODIES had a closing down sale of street furniture and we bought the lot - no matter what it looked like and regardless of its suitability. 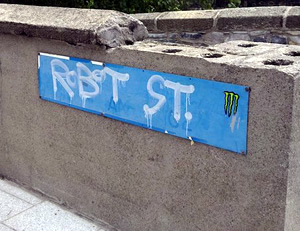 Consider the plaques for streetnames. Some are made of metal, some of plastic, some of a mix of both. The blue colour is very pale on many and very dark on others.

Worst of all, many such signs are completely unreadable because Dublin City Council elected to use stick-on letters that peel off over the course of a few years.

Maybe these signs were cheap. But, it was a poor choice with a predictable outcome and ultimately a false economy.

And it is not only bizarrely mixed designs for street furniture and signage that reveals our fragmented vision, but also Dublin's lack of 'discoverability'.

Nothing left to explore

By 'discoverability' I mean the sense of delight that comes from exploring and finding the unexpected in a landscape, whether natural or man-made. Think of what happens when you are on holiday and discover an exciting or curious local custom for the first time.

For instance, in Edinburgh where passers-by spit at the Toolbooth Prison stone, in London where the public debates freely at Hyde Park Corner or in Zagreb where citizens erect plaques at the city gate in thanks to local saints.

In comparison, Dublin is terribly poor in 'discoverability' - not only because it there is little to explore, but because DCC seems intent on eradicating any "unauthorised interactions" with our city-scape.

Did you see the news report a few months ago about couples attaching padlocks to Ha'penny bridge as a symbol of their love? These inoffensive and almost invisible momentoes created instants of delight for pedestrians crossing the Liffey. 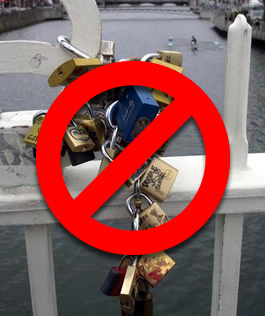 What harm you might ask? "It could damage our bridge" says DDC. OK, but instead of installing an alternative cable or chain for couples to attach their locks to, better to just stamp out the trend by removing them all.

What a typical bureaucrats reaction to imagination!

Or what about the Phil Lynott statue outside Bruxelles. For a year or so, music fans inserted plectrums into the brass guitar strings in homage to the master, until constant removal led to it being discontinued.

So rather than encourage a musical pilgrimage by making it easy to insert plectrums, better to just remove the hassle.

Or think of the Smithfield Horse Market.

DCC suggests it is too difficult to police and control animal welfare there. Instead of investing in an innovative policing and animal welfare plan in order to conserve a genuinely unique city feature, better to use these as excuses to close it down.

Which brings me back to my fountains

Why are there no fountains in the centre of Dublin?

Are they too much hassle to bother with? Is DCC afraid people might interact with them (throw coins in them?), thus requiring some troublesome cleaning? 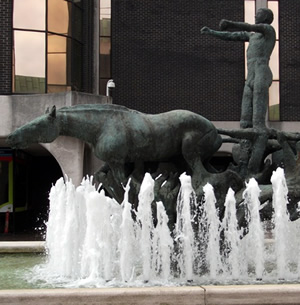 The only fountains I can think of are in College Green (cut off by swathes of traffic), one in the Irish Life centre (cut off by a deep moat), two in Stephen's Green (closed at 4.30pm in winter) and one near to Heuston station (at the side of a hideously busy road.)

(Curiously enough, I recall a street-embedded fountain that was installed in South King St about two years ago. I even saw it turned-on soon after. But it has not been operated since.)

Or perhaps the lack of fountains is due to a fear of destruction or vandalism?

OK, it must be admitted that the Irish people are unusually destructive when it comes to public spaces, as extensive littering and vandalism testify.

But that simply suggests a design constraint ... make things that are durable and robust. Surely the success of the bike scheme shows that it can be done. Design with destruction in mind and it may survive.

Does it matter anyway?

And yet, for all my whining, does it really matter?

I mean, who cares if we don't have any fountains, or if our street furniture doesn't match, or if the sign for "Cul de Sac" on one road follows the UK standard and the next the French standard?

Maybe I am being unfair? Perhaps I should judge our city on its delivery of less visible services like Social Housing, Drainage, etc.

Yet, in truth I feel that an authority that could allow developments like Priory Hall to proceed has forfeited the benefit of the doubt.

In short, we must assume that Dublin will continue to muddle on as a below-average city. A place that has a few great things about it, but remains generally shallow in experience and confused in appearance.

And of course what holds for Dublin, holds for the country in general. And that's too bad.